What Is It? – An Introduction

The ornamental Turk’s head knot might be a tad difficult for many to master. But once you have successfully accomplished the task of knot tying, the looks of it would be a pleasure to behold. The elaborate knot bears a braided structure. As per tradition, the scout knots were not secured. This was because they had to be undone for using around the camp or to produce fire on rubbing. But the modern scenario demands a secure finish as the ropes now-a-days slide easily. Since modern ropes also melt easily it would be a good idea to fuse ends with fire. In that case, you have to be wary as molten nylon is very hot.

How to Tie a Turk’s Head Knot

An easy version with 3 strands is shown here that can be modified to form several other tougher variations with 5 or 6 strands. 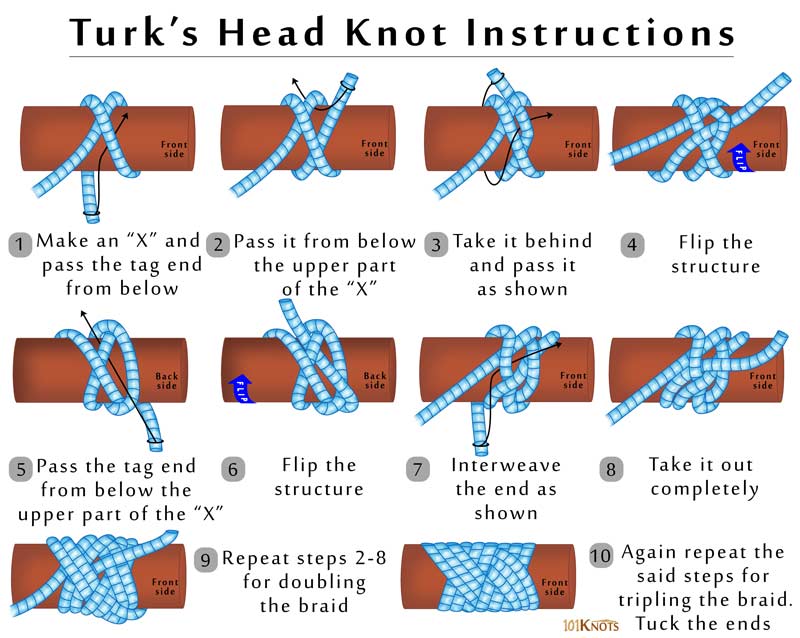 How to Tie a Turk’s Head Knot

If you have a large enough length of rope you can have many more braids. There may be more strands of rope employed in the creation of the braids and the number of times the end follows the lead can be modified for a long knot.

In this video tutorial you are shown how to tie a 5 lead 4 bight or a 5×4 Turk’s head knot. It is worth mentioning here that you get the number of bights by counting the number of scallop shaped crossings at the top of the knot. To know the number of leads, imagine a vertical cross section of the knot revealing the different parts of the knot. Count them and you have the leads’ total. Similarly you can make an 11×7, 13×4 and 16×3 knots.