The Windsor knot is also known by the names double Windsor and Full Windsor to distinguish it from the half Windsor knot. It produces a symmetrical, wide and triangular necktie knot. The large self-releasing knot amply displays the tie design and fabric when worn with a closed coat or jacket. It can also keep your throat warm in winters. It holds tight and doesn’t slip away when tied perfectly. You can do it easily and quickly after some practice.

The knot is thought to be named after the Duke of Windsor who was known as King Edward VIII, before his abdication. However, it is likely to have been invented by his father, George V. The Duke had a preference for wide knots and specially made his neckties with thicker cloth so that it produced a knot wider than the conventional four-in-hand knot. The Windsor allowed him to make a similar fat knot with ties of normal thickness.

Though it is commonly used in the armed forces including air cadets, certain sections of the UK army deem wearing it inappropriate since the Duke of Windsor abdicated the throne.

How to Tie a Windsor Knot

The below step by step diagram with instructions is beginner friendly. The ideal length of the tie should be around 1.6 inches to 4 centimeters more than a regular tie or else it could make your tie too short after tying. 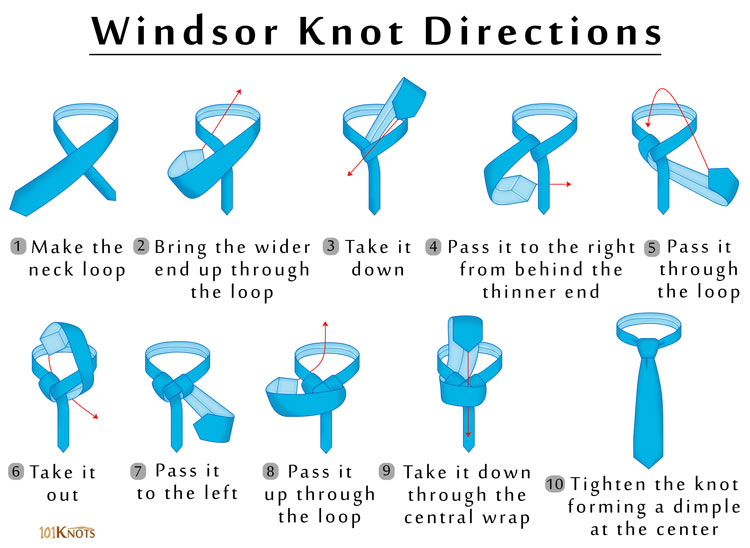 How to Tie a Windsor Knot

The four-in-hand knot is smaller and it suits all types of collars unlike the Windsor.

This is a regular view of the simple knot as seen being made by a person standing in front of you, face to face.

How Do You Tie a (Full) Windsor Knot: Point of View (POV) Video Guide

This video gives you a view of tying the knot from above, just as you would see it while making it yourself, without looking into a mirror.

How to Tie a Windsor Knot Step by Step